Race guide: HSBC UK | National Women’s Road Series at the Essex Giro
The 2017 HSBC UK | National Women’s Road Series continues on Saturday 22 April with the Essex Giro hosting the second round.
Elizabeth Banks (SunSport Velo) is the early series leader after getting off to the perfect start at the Tour of the Wolds and will be keen to make it two wins from two on the roads of Great Thurlow.

About the Series
The National Women’s Road Series is a nine-race competition, which runs from April until August.The first round took place in Lincolnshire as Elizabeth Banks came out on top in the Tour of the Wolds. This weekend’s Essex Giro is round two before the race heads to the Lincoln Grand Prix in May. June sees three races, starting with the CiCLE Classic in Leicestershire, followed by the Curlew Cup in Northumberland and the Otley Grand Prix in West Yorkshire. The first weekend of July sees the always popular two-day Alexander Tour of the Reservoir followed by the Newton Longville Festival of Cycling Grand Prix in Buckinghamshire later that month.The series concludes on Sunday 6 August with the Ryedale Grand Prix in North Yorkshire. Individual honours are up for grabs with an overall and under-23 champion to be crowned.

Ones to watch
SunSport Velo’s Elizabeth Banks is the early series leader and will have her eye on back-to-back wins. Last year’s Essex Giro winner Grace Garner also poses a major threat - she will be riding for her new team Wiggle High5. Fresh from international duty at the UCI Track Cycling World Championships in Hong Kong, Great Britain Cycling Team’s Emily Kay lines up in Team WNT colours alongside Natalie Grinczer, who was fifth at the Tour of the Wolds. Chanel Mason, of the newly founded Storey Racing, took third in Lincolnshire and will hope to improve her standing in Great Thurlow. Team Ford EcoBoost are always capable of providing a winner, even without 2016 champion Nikki Juniper who broke her collarbone at the Tour of the Wolds - Charmaine Porter and Jennifer Powell could provide the challenge for the team in orange and blue.

How to follow the racing
Follow the action from the National Women’s Road Series on our live blog from 2.15pm on Saturday, for race updates, images and social media.
Follow @BritishCycling on Twitter for updates from both events throughout the racing #WomensRoadSeries or on Facebook here.
Video highlights, reports, results, images and reaction will appear on the British Cycling website.
​
Download the race programme here - or view in slide show below.

The CCHackney Annual Road Race is being held on Saturday the 22nd April at Great Thurlow near Haverhill alongside the Essex Giro Women's Race.
This year we are organising both the races with the men's Regional A category 234 race - part of the ERRL series -  starting at 10am - they will race for 89km - 11 laps of the Great Thurlow circuit and be finishing shortly after 12pm. The womens race is part of the  HSBC National Womens Road Series - the race starts at 2.30pm and they will race for 12 laps equalling 95km.
Race entries here - https://www.britishcycling.org.uk/events/details/160497/Essex-Giro-Women-s-Race
https://www.britishcycling.org.uk/events/details/155663/CC-Hackney-Road-Race-2017
Race HQ -Thurlow Village Hall, The Street, Thurlow, Haverhill, Suffolk, CB9 7LA 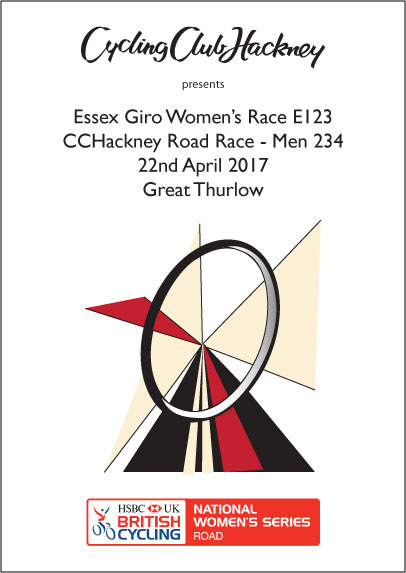 CCH members and friends as ever your help is needed for the successful running of this event contact Neil or Keir to volunteer - we need help in advance as well as on the day.

Entrants - currently we have 71 entrants for the 60 places in the men's race with priority going to members of ERRL clubs. In the womens race 44 riders have entered so far for 60 places in total.