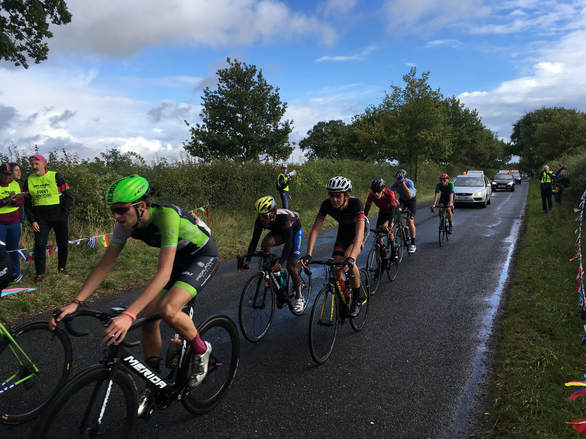 Race Report - photo gallery here
CCHackney organised its first Junior men's road race last Saturday 16th September over at the Bulmer course. Following an earlier cancellation we were asked to include the regional Junior championships for the Central, Eastern and South Eastern regions this would mean a busy day for the convoy as we expected the race to break up on the 21km long circuit and this is exactly what came about after the riders had completed 5 gruelling laps. Just as the race started to roll out from Bulmer Village hall the rain started - it didn't look too bad however none of the riders seemed to be carrying a rain jacket  and as the rain and wind hardened it would soon be a case of how many riders will finish? One lap in and the punctures were coming thick and fast as the rain brought out the grit on the roads.
A group of three riders -  Oliver Robinson of Thanet RC Race Team, Theo Modell of Team Corley Cycles and Lawrence Coyle of VC Jubilee stretched out a small lead of 20 seconds or so. They increased this to 30 on the prime lap with Oliver taking the honours. By now many riders had retired due to the cold wet conditions and the dwindling peloton brought back the break on lap 3. More attacks came and went as more riders retired and a lap four the same trio from earlier went up the road again this time stretching it out to 50 seconds. On the final lap the bunch split into small groups of two or three, When it came it the final sprint Robinson had the edge over Modell with Coyle coming in third. Only 12 riders completed the full race distance showing how tough he conditions were - there were many very cold riders at the finish who needed to get back to the HQ at Bulmer and warm up quickly. Full results below.
Thanks to the Accredited Marshals and Commissaires  for making it a safe and fair race, and to the women of the Bulmer Village Hall committee put on a fine spread of food and hot drinks. Thanks also to our sponsors DHW, William Chesire, Hub Velo, Hackney Council and ICIC Interlinkx and all those that gave some financial support. Finally thanks to all the CCH volunteers who came out to run the race, without whom it wouldn't have happened - Ian, Matthew, Rob, Chris, Paul, Euan, Sean, Jess, Liz, Judith, Isobel, Lavinia, John, Prosper, Jonathan, Andy, Wotjech, Kai, Connor, William, Robbie, Zemi, Harry, Neil.